Reach out to us anytime and we will happily answer your questions. There are many reasons why The Pine Lodge is an ideal home base for your upcoming Whitefish skiing trip, but perhaps the biggest is that every reservation during the winter season is a ski package! Our White Glove Experience is included with every winter room reservation at The Pine Lodge, and contains many ski package amenities to help you plan the perfect getaway:.

Check out our White Glove Experience page for information about all the ski package services and amenities available at The Pine Lodge this winter. Back by popular demand for the ski season, Whitefish Mountain Resort lift tickets are available for purchase at the Pine Lodge Front Desk. Save yourself some hassle during the busy morning rush, and buy your lift tickets at the hotel before you head out! Some of the best advanced skiing and snowboarding at Whitefish is in Hellroaring Basin. The Glory Hole, which runs right down the middle of Hellroaring basin is fun, but gets skied out quickly, traversing to either side will yield more fresh turns.

I, the nearest interstate highway, is a two and a half hour drive. However, this means that those willing to make the journey are reward with short or non existent lift lines and deep powder. The mountain is located just outside of the town of Whitefish, and a 40 minute drive from Kalispell. Major airlines fly direct from several cities. Once in Whitefish, there is a free shuttle from downtown to the mountain.

Travel Resources: Getting to Whitefish Free Bus. Lodging Information. There are plenty of lodging options for skiers and snowboarders riding at Whitefish Mountain Resort. These lodges, condos, and hotels are located both at the mountain and in the town of Whitefish. There is enough lodging available to have a great variety of accommodations for different budgets. The Hibernation House at the base area of the mountain is a great value, has free breakfast, and a hot tub. Whitefish Lodging Overview Hibernation House.

At the base, the Bierstube is a solid spot for an apres drink, a classic ski area dive. There is a lot of confusion about the name of the resort. Formerly known as either "The Big Mountain" or "Big Mountain" there was a lot of confusion with the other large ski area in the state known as Big Sky. The mountain itself is still "Big Mountain". This is covered on their website , but many resources seem to have a problem with this concept. That is total skier visits, which includes season passes just over 8, in the season. The busiest day on record was 8, skiers, on December 30, The average day is 2,, or less than one skier per acre.

This is much lower than most nationally-known resorts. The first year they were open, , they had 38, skier visits. Locals make up roughly half the visitors, with the majority of the rest coming from elsewhere in Montana, Alberta, Washington, Saskatchewan and Minnesota. There is a difference of opinion about the actual vertical drop of the mountain. The resort apparently measures from the top of Radio Tower which you have to hike up to down to the parking level in front of the base lodge and gets feet out of that. Mountain Vertical measures the "commonly skied" drop from the Summit House down to the hill-facing side of the base lodge and gets feet.

A check of Google Earth backs up the latter assertion. Assuming you weren't smart enough to buy an early season pass or the Frequent Skier's Card purchased before Dec. Sometimes retailers such as Bob Ward and REI have tickets, but I haven't been able to find information about this lately.

Okay, you've read about our fog. You decide, if you're a strong skier, that you want to get in those sight-saving trees. Where to start? In my opinion, the key ingredients in ranking some of these areas is 1 ability to call it quits and leave the area, 2 tightness of trees, 3 steepness of slope, 4 how likely it is that someone will see you "visibility" if you are in trouble, and 5 need for a responsible buddy to keep an eye on you. Given all that, here is the order I would start dabbling: The trees on either side of the gorge are usually the most open.

Density decreases as the season advances due to the smaller trees disappearing beneath the snow. Consequently, the difficulty is much higher at the beginning of the season. People can easily see injured skiers from the lifts, except for the larger trees west of Hidden Meadow and below the road. Exit skier's right on East Rim Face to get to Moe-mentum.

Good Med is mostly open, although there are tighter trees on the sides. East Rim Face is more the further you proceed along the traverse and the pitch is longer. Dropping in early for better snow limits your visibility quite a bit. Good Med becomes steeper the further you descend. The last section is also more likely to be bumped up.

However, it is easy to exit by traversing out. East Rim Face has a moderate, consistent pitch. Elkweed has varying pitches and easy access to Hogan's East. Big Timber is divided into two sections.


The upper section above the road which traverses it is largely gentle terrain, although an entry closer to Outside Road will result in a somewhat steeper pitch. The lower section is more steeply pitched, but not bad. For those who want to be found but not avidly observed by bored skiers riding the chair,Good Med and East Rim Face provide visibility without the feeling you are being scored. Elkweed has been thinned in the last few seasons, so gets a good amount of traffic. 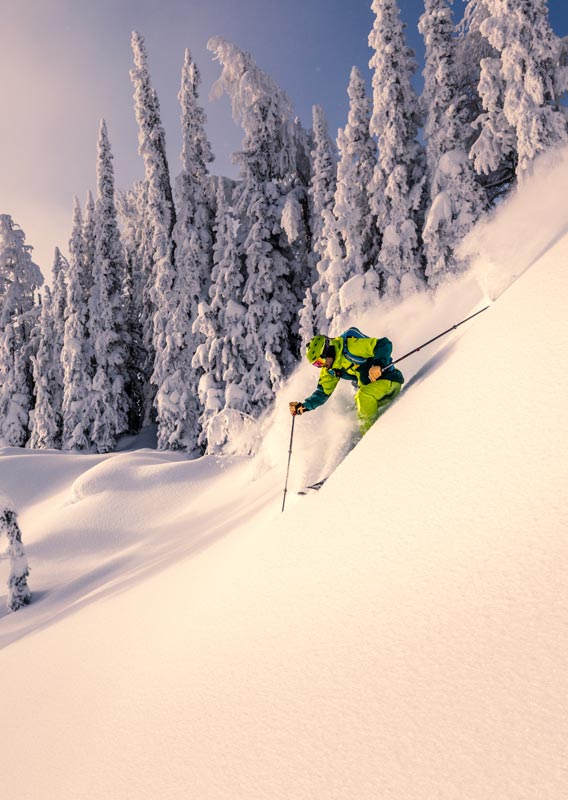 Hogan;s Trees might be a good area to have a buddy as the lower central section is a good ways from either Inspo or Hogan's. Fairly open in general with the ability to ski from one open area to another. This area is surprisingly large for its vertical drop. Not as gentle as the Tree Farms, but more gentle than the areas in the above section.

This area is listed after the above section largely because of the tree well and popularity issue. Larger area than one would think, skier density is usually very light in here. Skiing WITH a buddy not behind someone who is more worried about his line than you is a must. Fairly steep except for the trees off Goat Haunt. The trees in that area are tighter, however, compensating in difficulty for the decreased pitch.

Elephant's gets a fair amount of traffic and people can see an injured skier from above. Lee's is not quite as visible, but it's pretty short. Stumptown close to Goat Haunt gets a lot of traffic. However, if you traverse in quite a bit, this traffic drops a lot and you should bring a buddy. Glory Hole has no easy exit, once you are in, you are in. Gray's you can traverse skier's left to Glory Hole.

Evan's you can traverse skier's left to Russ's.

Sling Shot you can traverse to more open terrain via the Apron under Picture Chutes. Varies depending on where you are on the hill. All are fairly open except for the bottom of Gray's. Fairly steep, except for the gorge part of Glory Hole where the main issue is conditions rather than pitch. Evan's has a lower level of traffic than the others, but all should be avoided when skiing alone at the end of the day.

Hollywood and North Bowl Face have good visibility. Powder Trap is not bad. Black Bear Trees depends on where you are on the slope. Can traverse to Elephant's Graveyard and eventually to No Name by heading right. Schmidt's you can traverse to North Bowl Face. Gets less traffic than Elephant's, fewer people just standing looking down the slope. Schmidt's the tree density in some sections and pitch make it advisable to have a buddy. On the Langley runs, can traverse either direction onto more open, but steep terrain. In Movieland you can traverse to Elkweed or continue to Hogan's East, a blue square.

Take a buddy. Parts of Langley are visible, but there is not a lot of traffic. Same with Movieland.